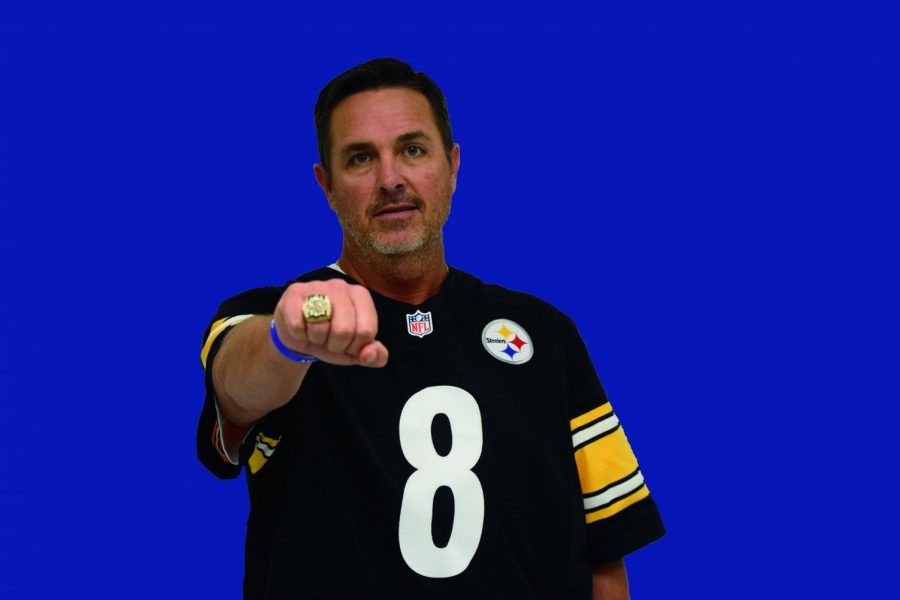 He sits at his desk with two blue and white colored Decatur baseball jerseys hanging to his left, and today, in the drawer to the right sits a gold and black ring, with clear white diamonds made into the band.

“From an early age, I’ve always felt like and wanted to be a professional athlete, and football was always there. I always thought about it, dreamed about it and worked towards trying to get there,” former NFL, XFL quarterback, and current DHS teacher and coach, Tommy Maddox said.

From 1993 to 2005, Maddox played for the Denver Broncos, Los Angeles Rams, New York Giants, Atlanta Falcons, New Jersey Red Dogs, the Los Angeles Xtreme, Pittsburgh Steelers, and the Philadelphia Soul. During his time with the Steelers, he played as the team’s quarterback and helped them win the 2006 Super Bowl earning himself a Championship Ring and a place in the hearts of millions of Steelers fans across the world.

“To actually be in the game knowing how many people are watching, knowing that commercials are made specifically for this thing, it’s incredible,” Maddox said.

Before he even stepped foot on a professional football field, he played touch football in his youth with friends and hit home runs on the fields of North Texas.

“I went to high school in Hurst at L.D. Bell High School, and it’s where I met my wife. My entire family lives here and every year in the off-season we’d come back and live here,” Maddox said.

Something definitely added to his experience as a professional athlete: traveling across the country alongside his wife, Jennifer O’Delle, and their son and daughter.

“It’s funny, you know? I missed all of the Super Bowl locker room celebrating because my son was on the field playing in the confetti making snow angels in the confetti,” Maddox said. “Just being able to watch him and enjoy that, and take pictures with my family holding the trophy meant more to me than going through it.”

The world of professional athleticism carries with it many drawbacks especially as a quarterback.

“You hear athletes sometimes, when they get booed, say, ‘Oh, I didn’t hear it.’ Well, when 80,000 people are booing at you, you hear it,” Maddox said. “It’s a daunting feeling knowing they’re all booing you, especially as a quarterback. They either love you or they hate you.”

After winning Super Bowl XL and hearing the loud cheers of his fans, Maddox felt the time finally came to hang up his jersey and settle down in one spot, right here in North Texas.

“After three years of pretty much just playing, I managed a white tailed dear ranch for 5 years. I wanted to find a place to coach and teach. Nobody would hire me though. I went on 7 or 8 interviews and no one would hire me,” Maddox said. “Then, Grapevine called me and it was crazy how things worked. I wanted to be hired as a football coach and ended up being hired as a baseball coach.”

During his time at Grapevine, the team he coached made it to the State level twice and won once.

He lived through what many athletes dream of, the good, the bad and the ugly. Through his twelve years of experience he learned many valuable lessons and ideas.

“We’ll hear a hundred things that are positive and one thing that is negative, and that is what sticks in our minds,” Maddox said. “You forget that though. You just have to be passionate about it (what you choose do), and if you are, you’ll accomplish things that no one else, or even yourself thought was possible.”