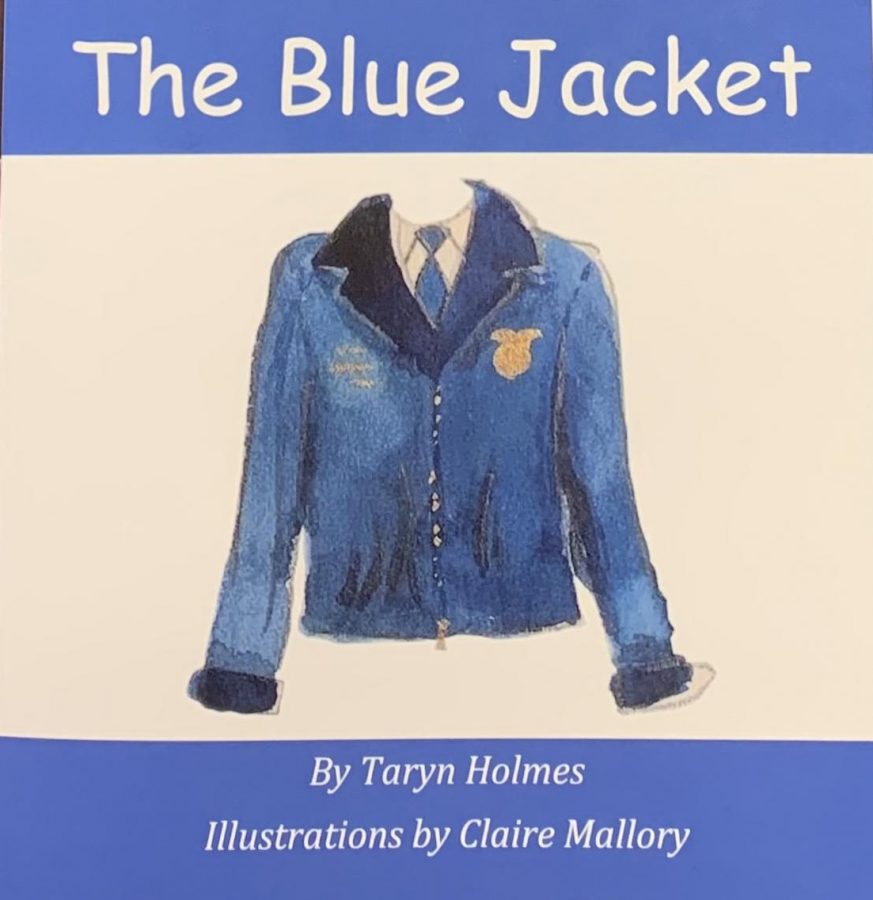 Decatur High School alumna Taryn Holmes wrote her second book this year in her freshman year at A&M called “The Blue Jacket.” The story follows an FFA jacket through the journey of being in the program and participating in events. Holmes was heavily involved in FFA in high school and the story reflects that. Claire Mallory, owner of Lovely Letters and Prints and also a 2020 graduate from Decatur, created the cover art, a drawing of the blue FFA jacket.

The idea for the story about a FFA jacket came from Holmes’ own experience in the program throughout her high school career. She held the title of Chapter Secretary for three years before moving up to District 1st Vice President and then Area Vice President her junior and senior years, respectively.

“The idea for ‘The Blue Jacket’ was a combination of a couple different factors and the actual plot of the story changed a couple times through the writing process,” Holmes said. “For one, at the time I had been focusing on communication and member recruitment through the FFA. I was contemplating a lot on why others should join the organization, what my own journey had been and how to tell it in a way that would be heard. When my younger sister joined the FFA, I realized that I had been recruiting all along, to all of my siblings. By simply having them observe my activities in the FFA and watching as I continually walked out the door in my own blue jacket, it sparked their interest. So I turned that experience into a story.”

Holmes pushed through the difficult writing process with the help of her mom to get her second book published while still in her freshman year of college.

“The writing process specifically was a lot of trial and error,” Holmes said. “My first draft was ridiculously long for a children’s book and each section in my notebook was accompanied by a rough sketch of what I was thinking about for a drawing. After getting my thoughts and ideas onto the page, I sent the draft to my most honest critic and greatest help: my mother. The draft was returned covered in red ink and encouraging notes, but I felt like I was back to square one. I fixed the story and trimmed it up a lot over and over after each new set of edits, until I was ready to present it to a practice target audience, my little siblings. By the time I finished the story, Claire’s paintings were done, so I got to work assembling, which was a whole different challenge.”

While writing this children’s book, Holmes learned to balance school and the rest of her life on top of continuing the story and publishing it. Holmes kept reminding herself of her target audience despite being around college students and professors.

“Being in school and classes as I tried to finish my book was not too stressful, although it definitely slowed my progress,” Holmes said.  “I started up a habit of writing at least ten minutes every day in order to force myself to work on the book. The hardest part was remembering that I was writing a children’s book. Especially at college with long words flying through coursework and conversations, I had to constantly remind myself of my target audience. Then, there was the matter of illustrations. Luckily, my good friend Claire Mallory who owns a painting business called Lovely Letters and Prints, was able to make the watercolor illustrations for the book. After receiving them however, I had to digitally cut out and convert the paintings to a format that fit into the book template. I had no prior knowledge on how to accomplish this but a few YouTube tutorials later and I was able to finish it. This book honestly took much longer than I meant it to, but I kept pushing through and am so happy about how it turned out.”

After working hard on the story and going through the long process of writing, editing, revising and finally publishing, Holmes says she felt relief.

“The moment everything regarding my story was finished, from the writing to arranging pages and designing the cover to pushing “Publish” on lulu.com, it was such a joyous relief,” Holmes said. “After such a long time and so much work, I could finally say that I was finished, that I had done it.”

Holmes admits that once an idea comes to mind, she feels the need to act on it right away, and starts writing the idea as soon as possible.

“I tell people all the time that I have writing ‘trigger fingers’ because as soon as an idea hits me, I have to put pen to paper,” Holmes said. “The completion of a story eases the itch to write and it is so satisfying.”

Holmes also gives advice to anyone who wants to follow in her footsteps and publish books as well. She reminds young writers to not get caught up in a perfect story, but to add to the story from mistakes and criticism.

“Writing is 30% inspiration and 70% determination. I have met so many people who have great ideas for plots or characters or scenes, but they don’t have the drive to write. People believe that writers have some magical ability to record stories, and writing is very much an adventure, but more often than not- I have to force myself to write. It’s easy to daydream about a story and think about what I want to write, but the actual action makes all the difference. So the best advice I have for an aspiring writer is to write! Write anything and everything, whether a plot or a detailed description of a day or random thoughts and questions. I actually keep a small journal on me at all times to write down ideas. I may not ever use half of them, but I know they’re there,” Holmes said. “Also, don’t let imperfection stop you from writing. Writing is all about making mistakes and building off of them. Take criticism graciously and don’t be afraid to put yourself in a position to receive criticism from someone whose opinion you truly value. And, for any writer with a story looking to publish one day, go for it! Talent has no minimum age.”

Order your copy of “The Blue Jacket” at https://www.lulu.com/en/us/shop/taryn-holmes-and-claire-mallory/the-blue-jacket/paperback/product-pwmr9n.html?page=1&pageSize=4